Fishermen and scientists, together on a journey to the antarctic

In 1986, the first expedition paid exclusively by spain to the southernmost continent set off from Vigo 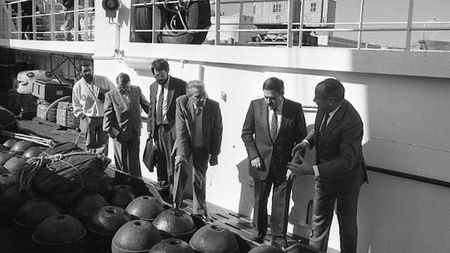 From the bow of the Pescapuerta IV, Carlos Romero, Minister of Agriculture, Fisheries, and Food, didn't hesitate to mark that 27 October 1986 as a “historic day for Spanish fishing”. From the port of Vigo, the first scientific mission and a fishing prospection team set off. They were brought together under an exclusively national company, which was financed by the Spanish Government in collaboration with the Vigo Cooperative of Shipowners.

The freezer trawler and the Nuevo Alcocero (which it would later meet up with in the South Atlantic), both belonging to Anamer, would explore the Antarctic waters for 90 days. Ninety-five Spaniards, of whom twenty-two were scientists from the Spanish Institute of Oceanography, went to work together to both carry out a survey of fishing resources that could be possibly commercially exploited and to conduct an oceanographic research programme. The ultimate aim was to seek a place for Spain in the Antarctic Treaty, thanks to its contributions to the knowledge of the frozen continent. This goal was achieved, and in September 1988, Spain signed the treaty and, later, was able to open the permanent bases Juan Carlos I and Gabriel de Castilla.

For this, the country had to prove conclusively that it would be able to open new doors to scientific and fishing knowledge regarding those areas of the globe. From a purely scientific viewpoint, that campaign was focused on determining the biomass of fish, crustaceans, and cephalopods that existed in the waters around the South Pole; this was done using analytical methods that allowed for the evaluation of the average sustainable yields for each commercially viable species and season, as well as the different depths. In addition, it aimed to study the hydrological, meteorological, and sedimentary conditions in Antarctica, by taking water samples and establishing temperature profiles at various depths in each area.

Commercial Species
The goals for the fishing part of the expedition were to carry out an initial evaluation of the commercial profitability of the fishing resources in those waters, for the Spanish deep-sea fleet, as well as to get an idea of the yield for the species of greatest interest and to evaluate potentially introducing them to the national market. In addition to other species, such as the Antarctic cod or icefish, the explorers sought to analyse the commercial potential of krill, a crustacean that exists in high concentrations around the Antarctic. A month later, members of the expedition were eating garlic krill, notothenioid fishes, and icefish. The crew and the researchers also had time to change the complicated names of some Antarctic species to the more Galician-sounding carpinchos and louros.

This experience took place in the waters of the Shag Rocks, at 53 degrees, 22 minutes south latitude and 42 degrees, 17 minutes west longitude. Over three days of sailing from the Argentinian port of Usuaia, in Tierra del Fuego, ten studies were carried out to determine the temperature variations across different depths of water, while the scientific team prepared their laboratories and started the first fishing tests.
At the beginning of December, the meteorological conditions changed. The frozen wind, a thick fog, snow, and a violent sea appeared almost suddenly, complicating tasks aboard the two fishing vessels.

Book
The journalist Valentín González Carrera was also on this journey. “This frozen wind blows fiercely, whistling like a blizzard in a gorge, but unlike anything we have ever seen: the snow mixes with the waves as they crash against the hull and are pulverised into a spray, and this swell floods the deck, misting the whole vessel. Only the birds, flying low and close to the sea, bear the bad weather unfazed, without straying from the boat that feeds them abundantly after each cast,” this Bierzo-born journalist writes in the pages of La Voz de Galicia. All of his experiences were later recounted in a book entitled Viaje a la Antártida [A Trip to Antarctica].

This voyage, which lasted four months, provided some very interesting information, such as “the Antarctic hole in the ozone layer is not alarming, at all.” However, the most important thing is that Spain was able to sign the Antarctic Treaty and become part of the research being carried out on solid ground. The outcomes for the fishing part were perhaps not as optimistic as originally foreseen, because the treaty establishes very restrictive rules on fishing in these areas. However, it is true that the conclusions obtained could be applied to other nearby fisheries, where the Galician fleet is currently hard at work.